To begin the new year, some good news for us.
First, welcome to two new lab members, Marie-Ève Arsenault and Charlotte Kemp. Welcome aboard !
Second, today two of our papers got published in the last issue of Computers in Human Behavior : the paper of Anna on spatial distribution of avatars in virtual spaces, using Second Life as a model (Lomanowska AM, Guitton MJ (2012) Spatial proximity to others determines how humans inhabit virtual worlds. Computers in Human Behavior, 28 : 318-323. [PDF]); and the paper on the impact of meta-media on immersive behavior, also using Second Life as a model, but analyzing the interactions between a meta-media (a media over a media, in this case a blog relating the events taking place in the virtual community of Star Wars Role-Play, all "in character", "GNN" (Galactic News Network) ... an amazing work of two avatars by the way, Daana Kira and Rakiko Lowtide) and the virtual world on which the meta-media is based (i.e., in this case the Second Life Star Wars Role-Play community) (Guitton MJ (2012) The immersive impact of meta-media in a virtual world. Computers in Human Behavior, 28 : 450-455. [PDF]).

With the new year, some new resolutions ! So, for all students (anywhere in the world, not specific to my lab) and for researchers alike, we should read more papers. To help you in that, my two Twitter account are here ! First, my main Twitter account :

There, I post very regularly links to papers, small comments, and so on ... Honestly, a "must follow" I think ... objectively, really ! Most papers suggested there will deal with virtual reality, augmented reality, social media, bionics, or papers of general interest ... But need to check regularly, I do update the "things to read" rather often.

Second, my second Twitter account, which is in French and supposed to be a support for the courses I teach. So, it is a bit more specific, but still. At the beginning of each post, there is the code of the course (Laval University codes, it is where I teach mostly). Some links are worth a look, for instance the one I suggest for the course NRB-7008 (Neuroscience II) on the auditory system.

Most of the posts however refer to the courses I teach to the ORL Residents (with the code ORL-X). Among those posts, I do some "suggesting reading", which are (obviously) aimed and centered around oto-rhino-laryngology. However, I think the suggested papers could be of interest for other as well. So, possible to have a look there too : 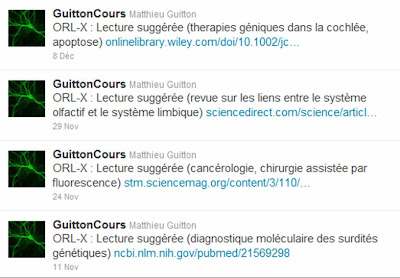 And once again, a Happy New Year 2012 !
Posted by Matthieu