The last months have been rather busy, which explains somehow why I haven't been posting since quite some time. Well, time now to catch up with what happened recently in the lab! Today's post will deal with the meetings in which the lab was present in the last few months, and I will talk about our recent publications in another (latter) post.

In the last few months, we went to three really fascinating meetings, the PCA/ACA Meeting, the RAI Meeting, and the FENS Forum.

The 44th PCA/ACA National Conference (Popular Culture Association/American Culture Association) was in Chicago, IL, in April. Like always, it was an extremely interesting meeting for me. I love the PCA/ACA meetings for the incredible fresh ideas I get there, stepping from the so diverse approaches and points of view that are displayed there. Cécile Cristofari was also presenting some of our work on the Steampunk community of Second Life there, and got quite a nice feedback.

The Royal Anthropological Institute 2014 Conference: Anthropology and Photography, in the British Museum in May was as well an incredible event. I was the Convenor and Chair of the first session, which was entitled "Anthropology and photography in the digital age". Both Cécile Cristofari and myself gave a talk in this very symposium. We had an amazing feedback, and I was extremely surprised (and pleased) to see how much modern anthropology has incorporated cyberspaces in its practice. As well, I was (again) both surprised and pleased to witness the fact that Computers in Human Behavior had quite a good reputation among those anthropologists interested in the study of social media and other virtual worlds. Beside being in such a prestigious location than the British Museum, the quaility of the talks were mostly of the first order, and we came back with a lot of new contacts and ideas. I even wrote an editorial in Computers in Human Behavior about that (going to be out soon, hopefully). The meeting was preceeded by a few days that I spent at the Future of Humanity Institute of PRof. Nick Bostrom at the University of Oxford. A very interesting experience with a lot of inter-discplinary interactions, very valuable for me, and which elicited quite a few new ideas and angles of view for me. 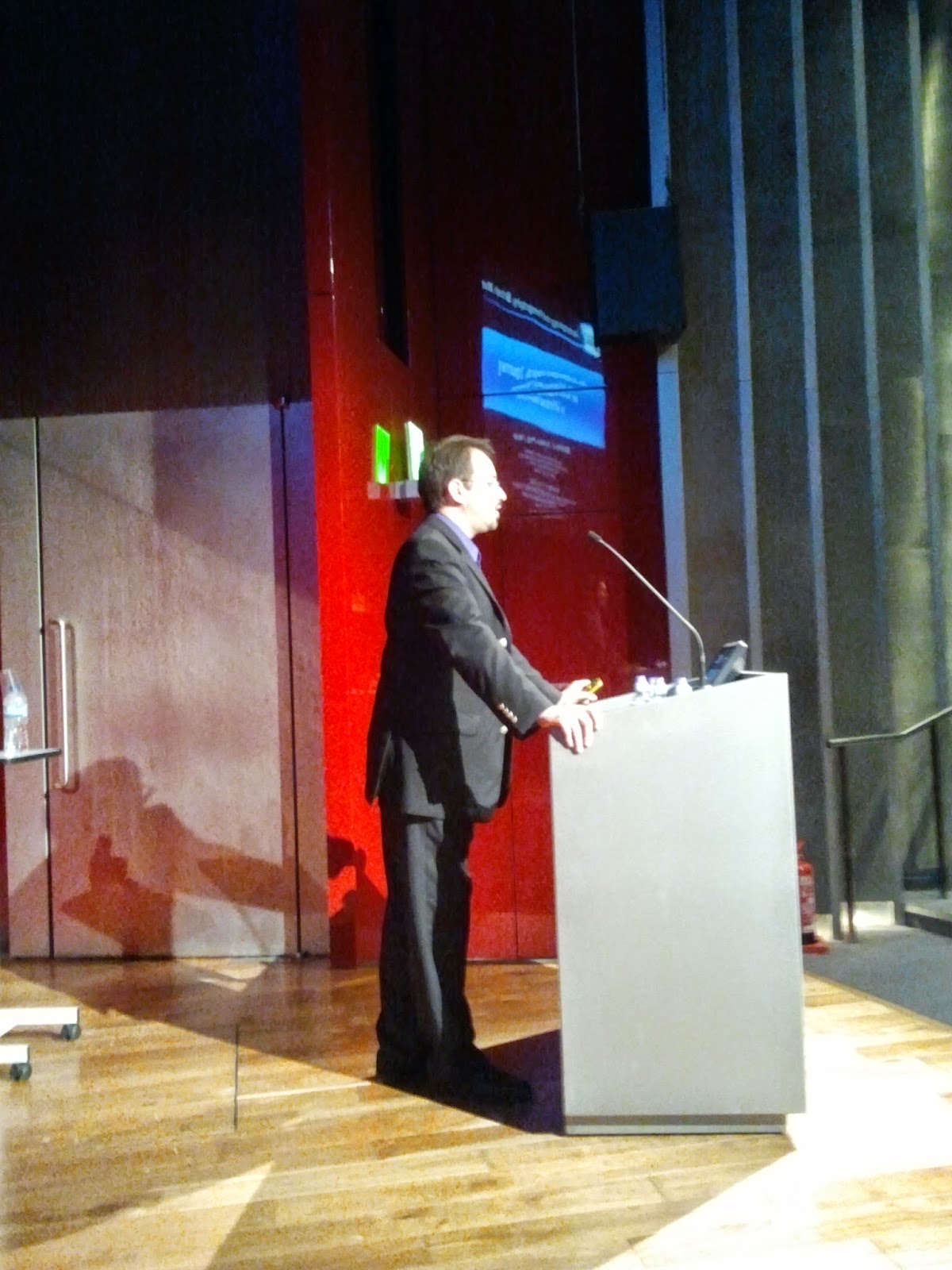 Finally, the 9th FENS Forum of Neuroscience (Federation of European Neuroscience Societies) just took place last week in Milan, Italy. The FENS Meetings are always among my favorite ones, due to a few things, including (but not limited to) the fact that I get to see a lot of my old friends, the fact that peple are somehow less worried to show really innovative and not-yet-published studies (in contrast to the SfN meeting where people usually only show things ready to be published, or actually already published), and to the diversity of approaches in neuroscience that you can see across the different European countries. Now that what I do is slighlty different from purely molecular neuroscience (Well, I always was mostly involved in behavioral neuroscience anyway, but now the focus on interest has clearly drifted to cyberbehavior), I was expecting that what I was doing now would elicit considerably less interest that before among my fellow neuroscientists. Surprisingly for me, that was absolutely not the case. Maybe I got slightly less people at my poster (which was on moral decision making using zombie apocalypse massively online role-playing games as a model, the related paper just got published in PLoS ONE a few days ago) than when I was doing animal model of tinnitus, the quality of the feedback was amazing. I got people who were really interested in some of the various aspects of what we did: virtual spaces, cyberbehavior, decision making process... Who knows, maybe some interesting collaborations might follow? 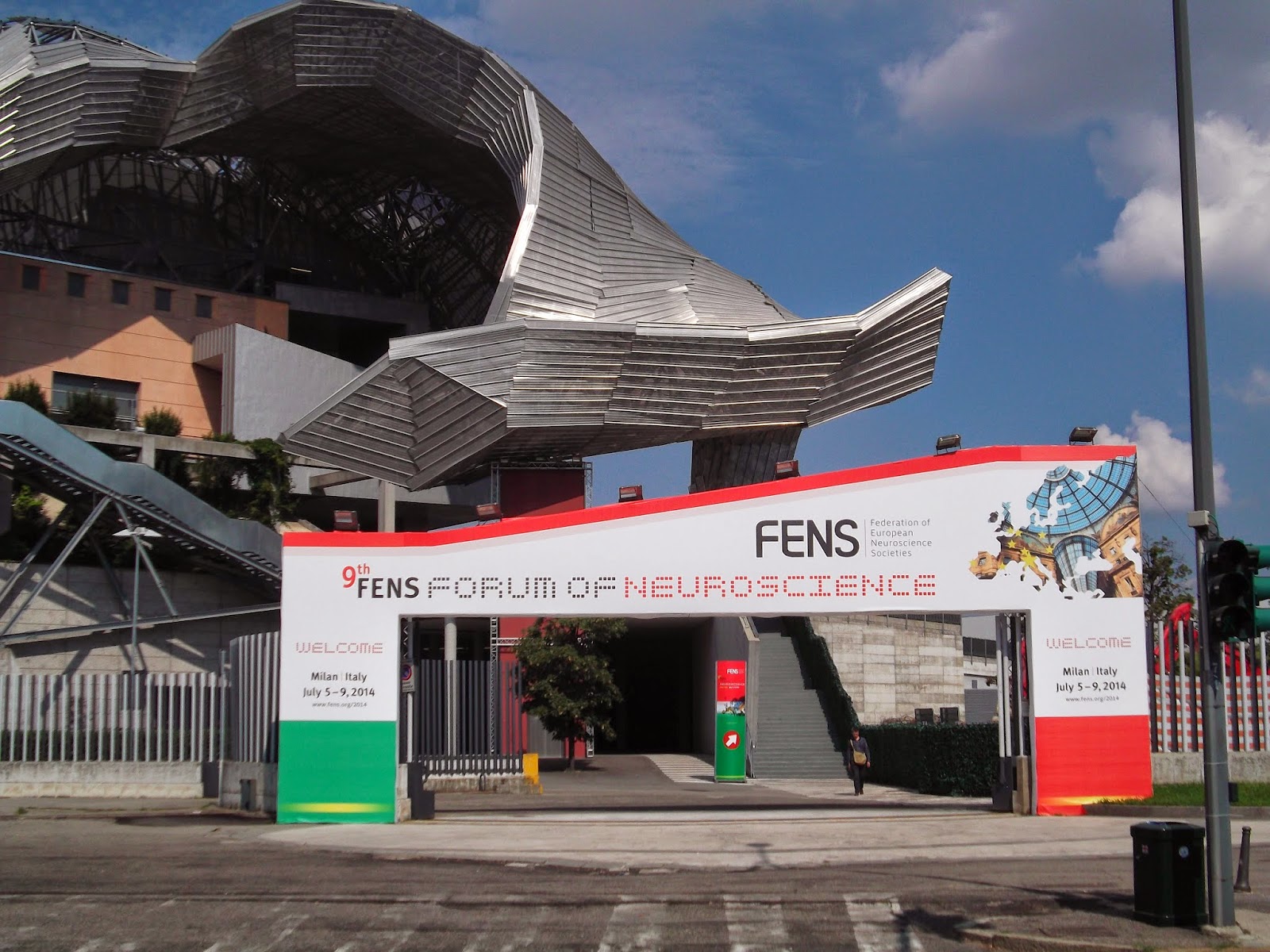 The entrance of the FENS Forum, at the center of congress of Milan. 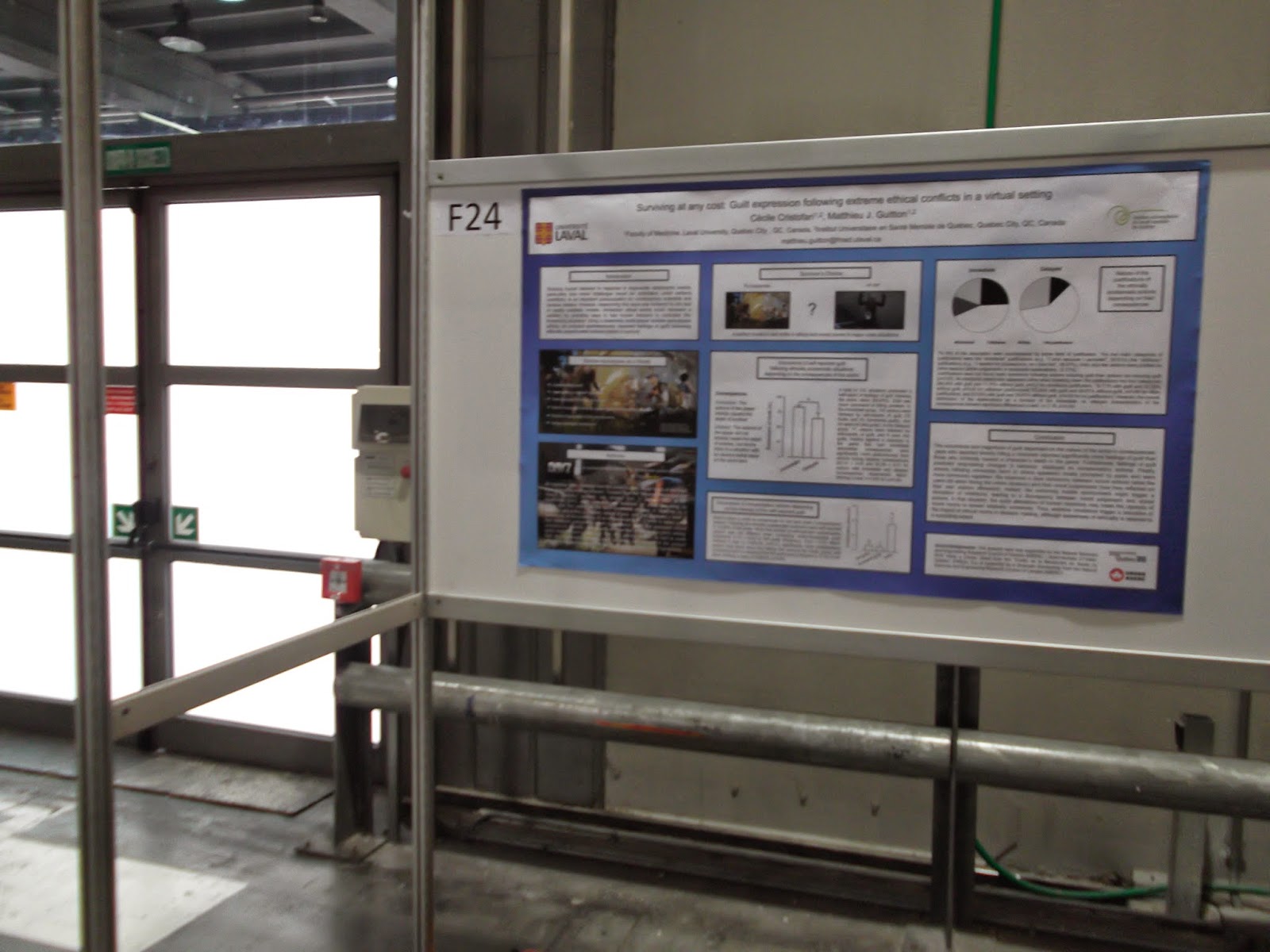 Our poster, conveniently located close to an emergency exit...
with zombie invasion, you never know. 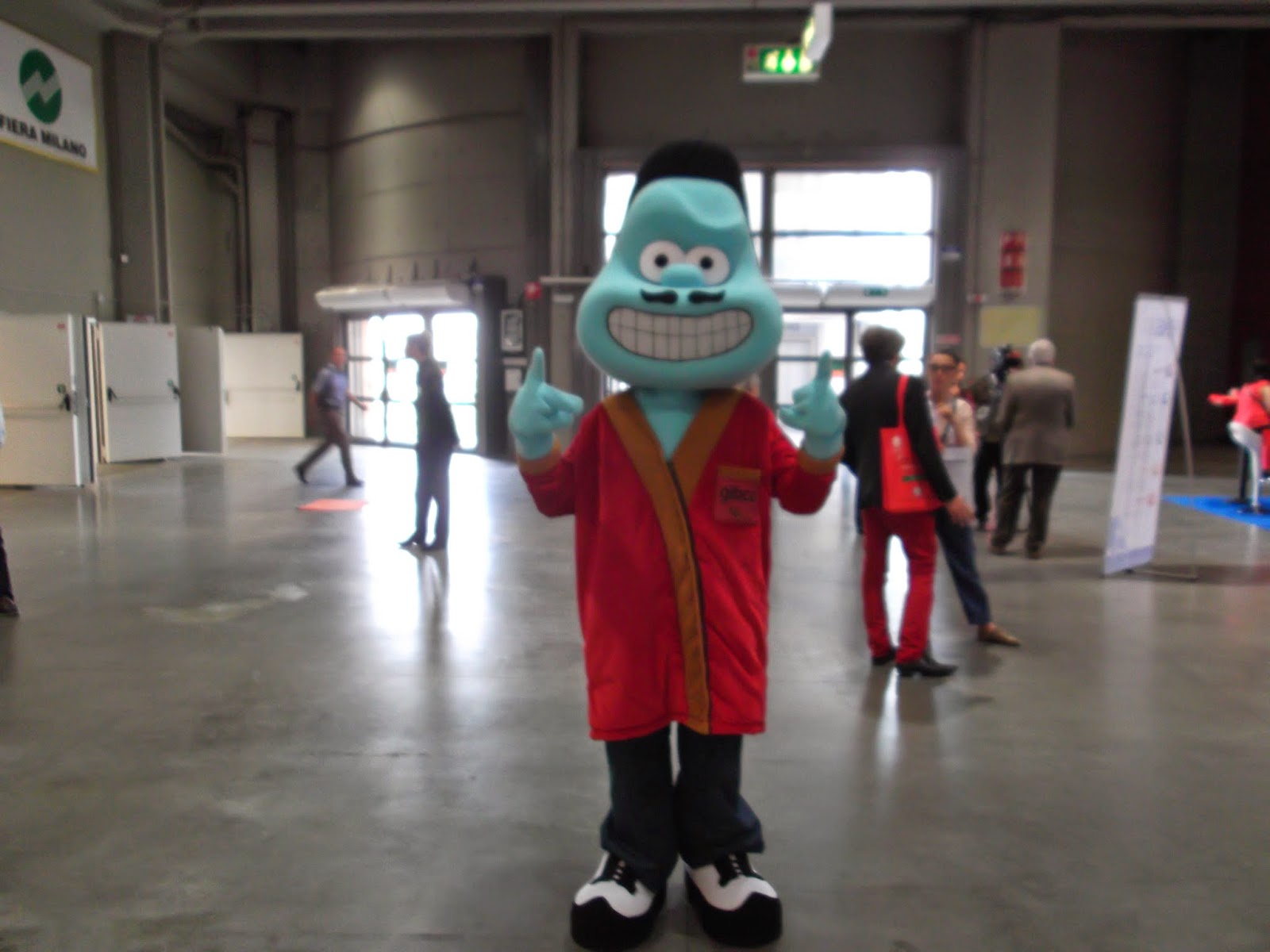 Which confirmed my initial observations that scientists are in fact big children. 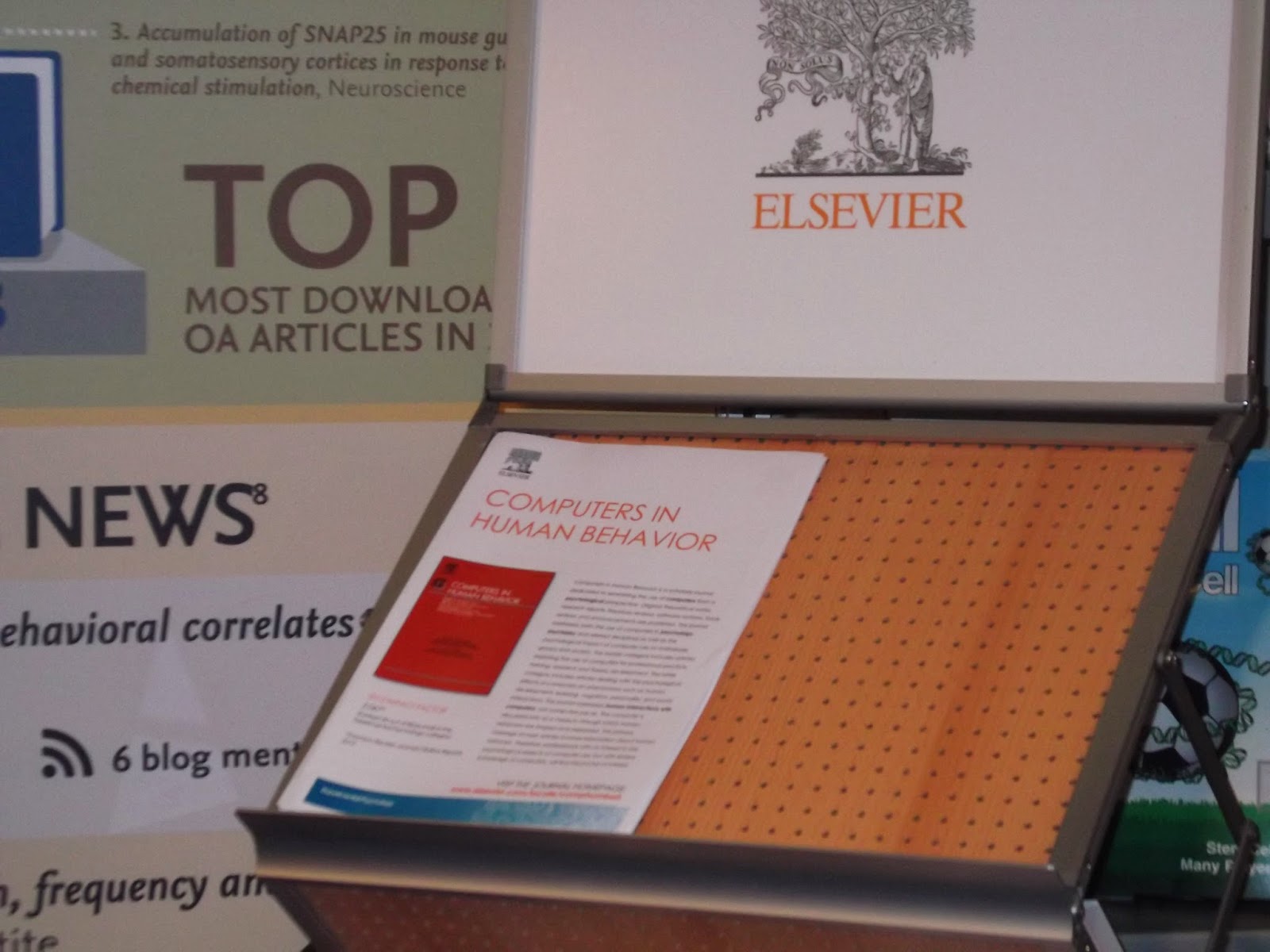 Computers in Human Behavior flyers at the Elsevier booth.
Posted by Matthieu